"10 Reasons to use Offline Controls Testing for Your Next Project"

Although each automated material handling system (AMHS) project presents its own specific set of challenges, common to all projects is the challenge of commissioning. The hardware meets the control software for the first time, products are introduced into the system, and operators are trained on how to run it. Despite the use of many standard components in a modern automated system, each one is really a prototype and requires thorough testing. Emulate3D Controls Testing allows more comprehensive testing using an accurate Dynamic Digital Twin of the real system, earlier in the project cycle, and at a lower cost, than is possible using traditional techniques.

Each System is Unique

When the need to reduce build time and costs, which drives standardization, encounters the reality of an exact customer requirement, the result is a unique solution with its own control and configuration challenges. Decisions taken at the design stage determine the cost of ownership, throughput, flexibility, and ease of use of the resulting system. Pre-production acceptance testing is the last minute confirmation of the quality of these decisions, when few modifications outside of the control system are possible.

Controls as Part of The Bigger Picture

The launch of a new product created on an automated line may be synchronised with a marketing campaign, and it will also have broad implications for logistics and storage from the raw materials through to the final point of sale. The hardest thing to move in the AMHS business is the system handover date, so delivering a new line on time is crucial to its profitability. From the day the contract for an AMHS is signed, however, there are risks associated with every constituent component delivery, a risk which is magnified by system changes resulting from evolving end user requirements. Although delivery variability can be taken into account, each delay puts pressure on the controls testing phase and threatens the system delivery schedule.

The dynamic behavior of an AMHS cannot be fully tested until it is complete, which places controls testing right at the end of every project, squarely on the critical path. This is unfortunate for many reasons, not least because the duration of controls testing frequently proves so hard to predict. Lateness penalties written into AMHS contracts are there for good reason - many projects are delivered late, often due to the unforeseen nature of the testing process. What is essentially an office job requiring concentration and problem solving skills is invariably carried out under pressure in a warehouse or a factory environment. Testing is often difficult to do properly due to time constraints, practical limitations, pressure from the end user, pressure from the system integrator, and changes to the required system specification.

The Advantages of Offline Controls Testing

One of the main advantages of performing controls testing offline with Emulate3D Controls Testing is exactly that - the fact that it can be done offline means that it can be taken off the critical path, and this clearly presents many benefits to the user. As soon as the design and planning phase of the project is complete the control system can be built ready for testing. Not only is the testing phase off the critical path, but it is now unrelated to the state of the hardware. Proposed control system changes to existing systems can be reliably tested while the system continues to produce in its current configuration.

There is a clear incentive to test the control system against an Emulate3D model of the hardware as soon as possible as this provides further verification of the expected system operation. Should any problems be highlighted at this stage, many options, including hardware changes, are still available to the system designers. End users can be shown operational sequences and operators can be trained on the real system responses, and they will make fewer mistakes. Interface designs and screen layouts can be modified and improved if it is observed that the HMI (Human/Machine Interface) is less than clear. The fine positioning of sensors can be determined, and functional parameters tested and optimised.

The opportunity exists to run batteries of Emulate3D tests on different computers simultaneously, thus effectively multiplying the amount of testing time available by the number of computers used. Once the hardware system is installed on site, the controls testing phase is reduced to a minimum checklist to ensure the correct connection of all sensors and outputs, as the logical verification of the system will have been completed off line. Once the system is in production, the Emulate3D Controls Testing model remains of considerable value to the end user - few systems remain unchanged during their lifecycle, so any proposed modifications should again be evaluated offline first, prior to implementation.
Contact us now to request the white paper, "10 Reasons to use Off-Line Controls Testing for Your Next Automation Project", or for further information. 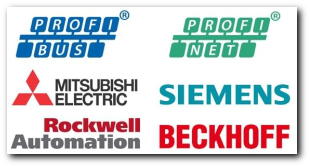 Emulate3D Controls Testing models are Digital Twins that connect natively to a wide range of PLCs, and can be connected to other manufacturers' products via a wide range of industrial standard protocols.
The Emulate3D framework also facilitates robust connections to WMS, WCS, and ERP systems for High Level Emulation.
Please see the Connectivity page for a full list.

Emulate3D Controls Testing allows more comprehensive testing, earlier in the project cycle, and at a lower cost, than is possible using traditional techniques 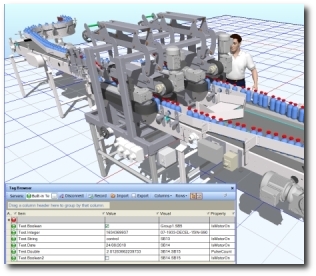